In this write-up, we’ll share with you all the details you need to know about the Three White Soldiers pattern and how you can improve your trading performance with it.

What is a Three White Soldiers Pattern? Among the commonly sought-after bullish reversal patterns is the Three White Soldiers pattern. This pattern occurs after a bearish or downtrend. As a basic trait of this candlestick pattern, it is composed of three consecutive long green candles. Each opening price of the later candle should be close to the closing price of the previous candle.

It got its name from how it looks. Back in the days, the color of candles on charts was either white or black. White for bullish candles, and black for bearish candles. Since the pattern is made up of three consecutive white candles, it is named after it. The word “soldiers” was incorporated into its name because the pattern is assumed to provide a “strong” buying signal. Soldiers are known for their courage and strength and are always likely to move forward. With this, the name the Three White Soldiers has been established.

To implement the use of the Three White Soldiers pattern on a trade, one first needs to identify the correct pattern. Fortunately, this is easy to do since a trader only needs to find three consecutive bullish candles with considerable bodies, and less to no tails. It is also important to note that the pattern develops at the end of a downtrend. So, make sure to look from downtrend markets.

Here are a few examples from actual charts on eToro 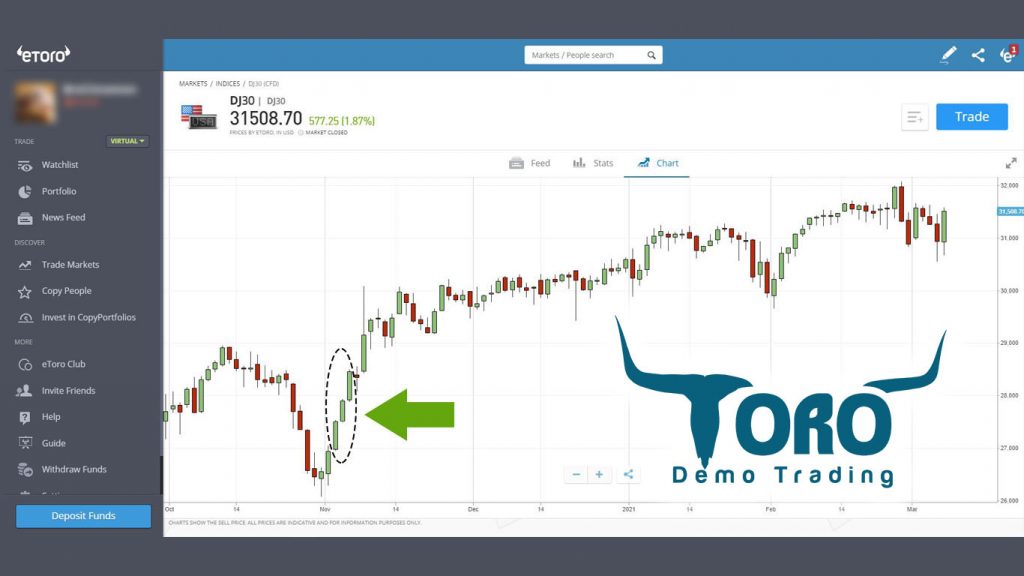 On this first example for the stock DJ30, the pattern formed right after a quick downtrend. The pattern did not include the earlier candle right after the reversal because it has a considerable tail which is almost 50% of its body. If any of the candles have long tails which are 10% or more of the body, then the pattern is considered invalid. It is important to take note of this small detail since it can cause huge consequences or losses.

After the pattern formation, the trend continued to move at an uptrend and continued for a long time.

Another example is for the asset OIL. On this particular example, the Three White Soldiers pattern occurred twice – one from a major downtrend and another from a short downtrend. Both pattern formation shows three consecutive bullish candles with considerable bodies. Also, each candle has very small and even no tail at all.

As mentioned earlier, the smaller the tail, the stronger the buying pressure which pushes the market to continue an uptrend movement.

The ideal entry points when dealing with the Three White Soldiers pattern would be a level above the last candle. On the other hand, the ideal place to set a cut-loss level would be at the base of the third candle.

To wrap it up, the Three White Soldiers pattern is a bullish candlestick pattern that confirms reversal toward a bullish trend. This pattern forms at the base or end of a downtrend, and each of the candles should have considerable bodies with small to almost no tails or shadows.

Although this pattern may seem like a fool-proof pattern that ensures profitability, it actually just serves as a guide to a trader. Candlestick patterns only serve as a guide and confirmation for an existing analysis or evaluation of a chart – these patterns do not tell the future.

With the proper insight and mastery of using patterns such as the Three White Soldiers pattern, a trader would be able to make more sound decisions in trading and can increase potential profits. One way to practice this pattern on actual trade is through the eToro virtual portfolio. It allows traders to trade real-time by using virtual funds.

Despite bear markets being a natural period of a market cycle, it may be hard to anticipate such … END_OF_DOCUMENT_TOKEN_TO_BE_REPLACED

In the forex and stock market industry, prices will always fluctuate in a consolidation or … END_OF_DOCUMENT_TOKEN_TO_BE_REPLACED