One thing which people usually say when they hear “trading” or “Day Trading” is that it is complicated as well as daunting. While there may be some truth to this, anyone can actually become a good trader provided he or she is knowledgeable of the basic candlestick patterns. These basic candlestick patterns allow any beginning trader to trade effectively like a pro, having lesser risks and more potential gains. In this article, we’ll be discussing a basic yet powerful candlestick pattern which is the Railway Tracks Pattern – how to distinguish it in a chart and how to use it on an actual trade at eToro. 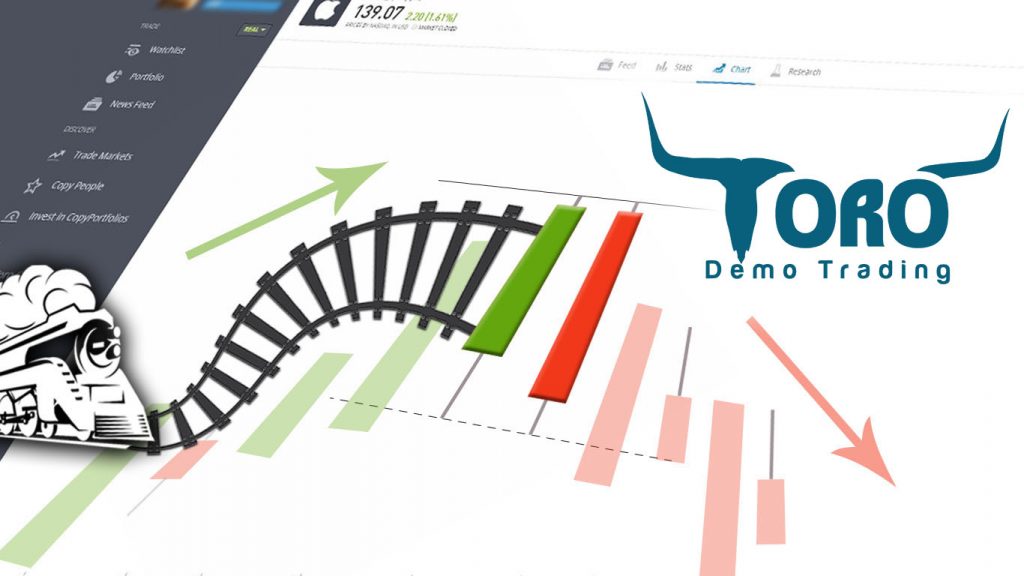 What is the Railway Tracks Candlestick Pattern?

One basic characteristic of a Railway Tracks Pattern is that the bodies of the candles should be more significant than the shadows or tails. The second candle should have a thicker body which overwhelms the first candle – this shows the strength of the second candle which pushes the trend to move in the same direction as the candle. However, there are also times when the second candle may be smaller than the first – this usually happens for short trend reversals.

It got its name from how it looks – which is like a railway track.

How to Use the Railway Tracks Pattern on an Actual Trade

For us to determine the best application of the Railway Tracks Pattern on actual trade, let us consider a few examples for actual trades by some of the most popular assets on the market. For this example, let us use the assets Apple and Nasdaq 100. 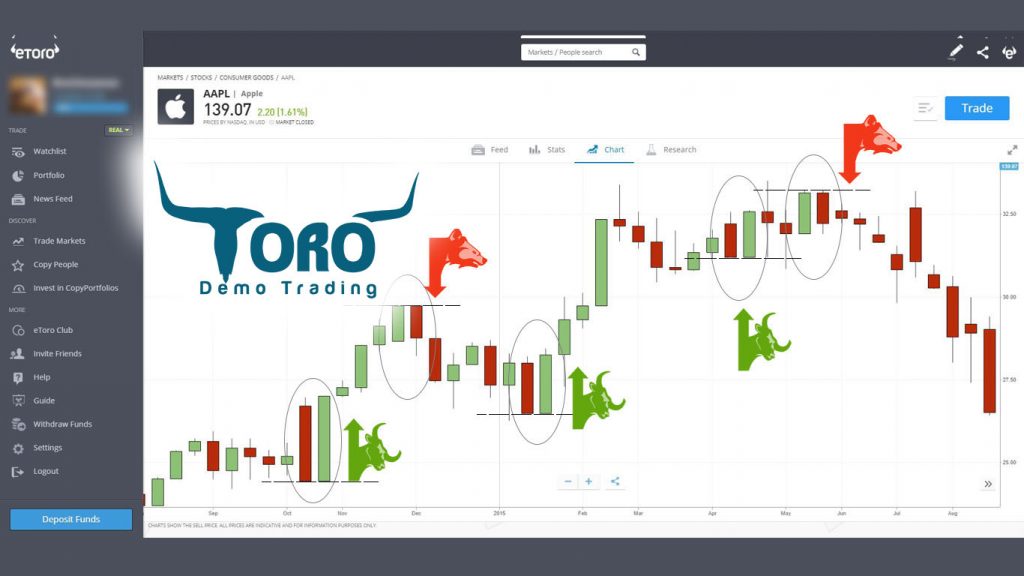 This particular example for Apple has been taken using a weekly range and can be done by simply clicking the range dropdown menu from the tab of tools located on the top right of the panel (as shown on the image below). You can choose from per minute, per hour, day, and week for your preferred range. 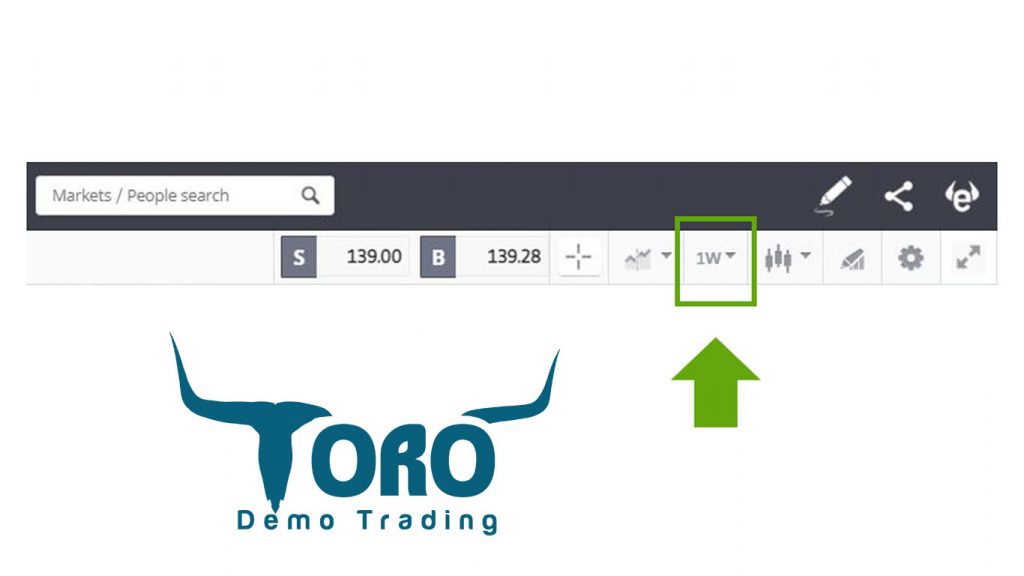 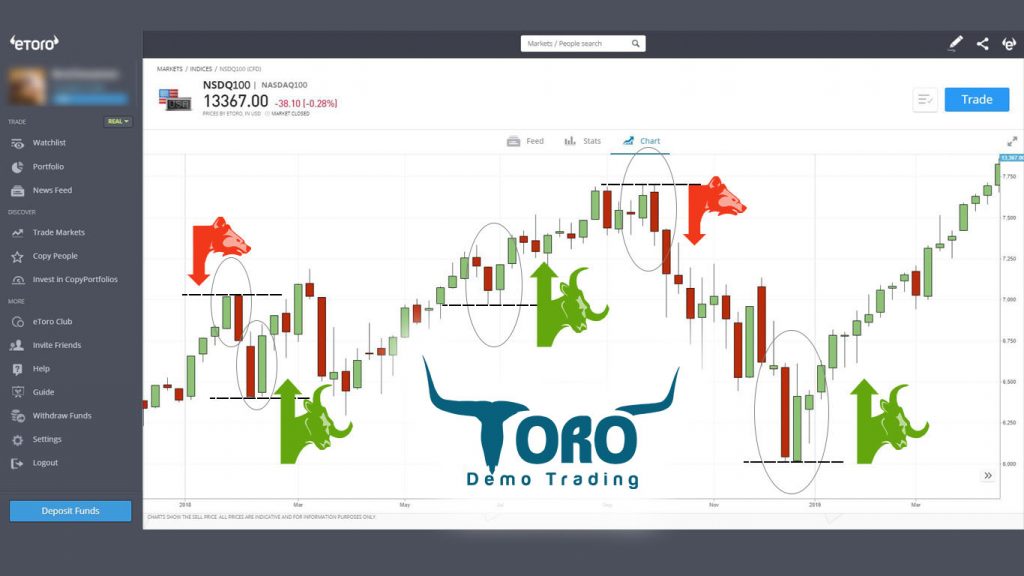 Although the Railway Tracks Pattern is easy to comprehend and is a good indicator for a reversal, they may be hard to find in the chart. Oftentimes, you will need to use varying date ranges by changing the duration or range settings as shown earlier. The best range setting to use would be where the price movement is clear and readable. A range setting that is too small (such as the minute range) can provide you with very small and thin candles which can be hard to interpret. On the other hand, a range setting that is too big (like weekly range) can take away trench formations where pattern formation is possible.

The Railway Tracks Pattern is actually quite easy to implement in an actual trade and it involves lesser risks compared to other candlestick patterns. What’s important when dealing with this pattern as well as all other candlestick patterns is to always consider a candle confirmation right after the pattern formation, and take advantage of tools that will help you visualize possible entry and exit points.

Only by understanding the Railway Tracks Pattern can you be able to benefit from it. With a practice account at eToro, you’ll be able to master this pattern in no time and increase your chances of gaining profits.

Despite bear markets being a natural period of a market cycle, it may be hard to anticipate such … END_OF_DOCUMENT_TOKEN_TO_BE_REPLACED

In the forex and stock market industry, prices will always fluctuate in a consolidation or … END_OF_DOCUMENT_TOKEN_TO_BE_REPLACED