At this moment, you’ve probably heard about a dozen trading patterns – from cup and handle, double top, double bottom, triple top, flags, triangles, and so much more. However, one uncommon name in the collection which is still gaining popularity is the Pig Hoof Pattern. So, what is the Pig Hoof Pattern and how can you implement it on actual trades on eToro?

What is a Pig’s Hoof Pattern?

As its name suggests, this pattern indicates the formation of a Pig hoof-like pattern in a chart and dictates that the trend is about to undergo a reversal. As shown in the image below, it also resembles the letter “M” and “W” as its counterpart.

An RSI Divergence happens when the RSI line doesn’t agree with the direction of a price movement. An RSI line is drawn by connecting the peaks (nails of the hoof) with a line on the RSI chart. If the RSI line has the same direction or angle as the trend line from the chart, then there is no divergence. Otherwise, if the RSI line goes upward or downward instead of being horizontal then divergence is confirmed. Notice as well as that the peaks (the nails of the hoof) should be touching the support or resistance level at a horizontal line. The breakthrough happens as soon as the trend line from the middle peak is breached at the right side of the pattern.

Unlike the double top or double bottom pattern which forms during strong price rallies, the Pig’s Hoof pattern can form pretty much anywhere on the chart. Whether it’s on the beginning of a trend, in the middle, during consolidation, and everywhere else. And while many refer to this pattern for long-range trading ventures, many prefer using it for intraday trading or day trades having 1-minute intervals. By using this pattern correctly for intraday trading, considerable profits are foreseeable.

Finding a Pig’s Hoof Pattern on a chart

Whenever looking for this pattern on a chart, simply bear in mind its distinct form – which is the Letter “M” for a bearish Pig’s Hoof and the letter “W” for a bullish Pig’s Hoof. as mentioned earlier, this pattern can show up on any parts of a trend and is most likely being used for intraday trading because it dictates when to sell and when to buy positions especially on volatile markets.

Using the previous image, both the peaks should touch or land on a common trend line. At the same time, the bases should also fall or touch a parallel trend line. Since this pattern is not time-sensitive, it can form within a minimum range of 10-15 minutes.

Once the form has been verified, we can now proceed with verifying the RSI Divergence.

Before we proceed, the RSI or Relative Strength Index is a popular technical indicator that shows the historical weakness and strength of a particular stock based on recent closing prices. Using certain parameters and limits, traders are able to determine whether a stock is overbought or oversold by simply referring to a stocks’ RSI.

To check out the RSI divergence and to use lines on the chart at eToro, simply click the indicator settings on the upper right-hand corner of the eToro platform. From there you can choose your preferred set up using tools, periodicity, and other settings such as Studies for RSI. Now that you have a good understanding of what the Pig’s Hoof Pattern is, let’s see how it works on an actual trade on eToro. For the examples, we’ll be using a few stocks on eToro that displays the use of this pattern along with the result after the pattern has been established.

The image below shows an instance of a Pig’s Hoof pattern on Tesla towards a bullish market. We can see from this example that the pattern formed within a short consolidation under a volatile market. Divergence is confirmed after drawing a line connecting the peaks of the hoof. since the line is directed upward, the trend is expected to move in an upward direction as well – which is bullish. 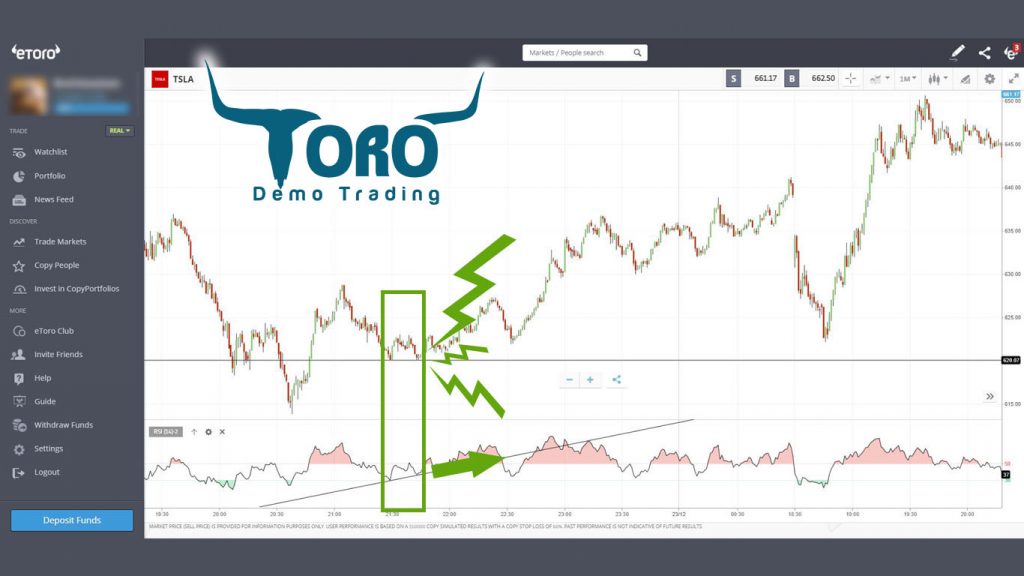 After the pattern, we can see that the trend continued to a bullish market.

Another example is for the stock NIO (NIO Inc.) which displays a Pig’s Hoof Pattern on a bearish market. 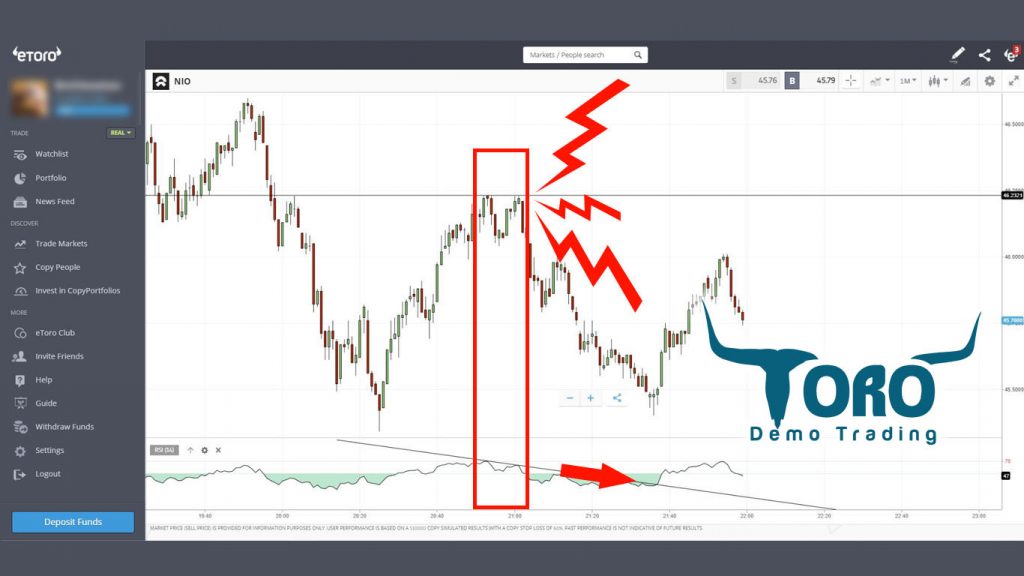 We can see from this illustration that the pattern formed after coming up from a steep price drop. This example also shows that the RSI line is directed downwards indicating a direction of the trend. After the pattern, we can see that the result really moved to a bearish market.

Although using the Pig’s Hoof Pattern is pretty much straightforward and easy, there are still ways to further improve the accuracy of this strategy. They are as follows.

Overbought and oversold indicators can be established in the RSI chart by drawing a horizontal line to divide the movement. As a general indicator for overbought and oversold on the RSI chart, we can use 70 and 30 – 50 serves as the neutral line. Any price movement above the 70 line is considered overbought, while any movement under the 30 line is considered oversold. 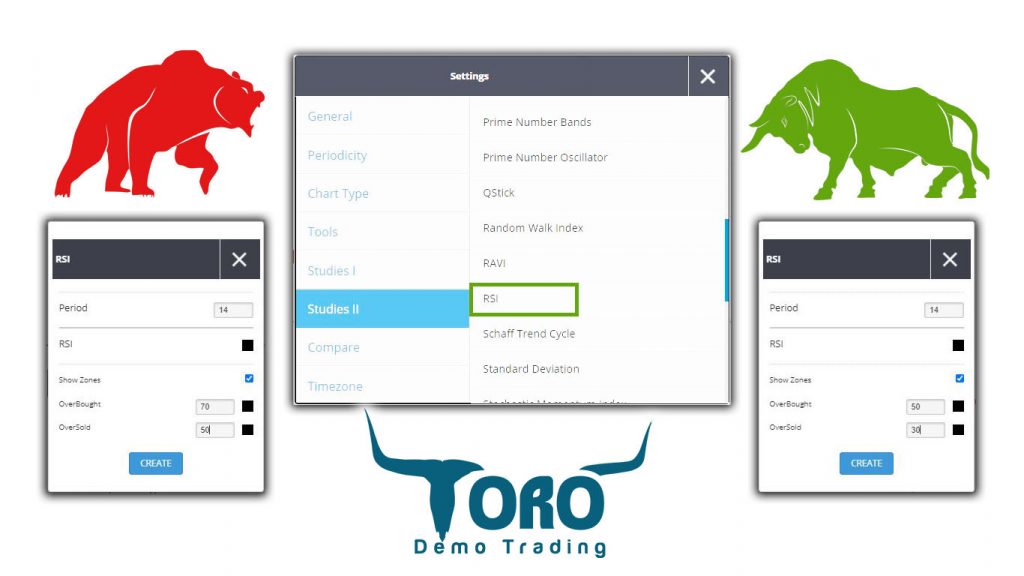 As mentioned earlier, the Pig’s Hoof pattern is mostly used in intraday trading or in fast markets. This means, there is just a little time to react and it is always best to have an exit or entry point established. In this regard, it is always best to come up with a reasonable exit point along with an entry point to avoid risks and considerable losses.

While this pattern has upfront features and the results are pretty much straightforward, it actually takes a good amount of patience to find it in a fast-moving market during intraday. In addition to the good knowledge acquired from this article about the Pig’s Hoof Pattern, a trader also needs to have a good sense of decision-making when it comes to entry and exit points. Also, a fast computer to execute the trades and monitor the price changes as it moves per minute would be best.

Knowing about the Pig’s Hoof Pattern allows you to be more cautious and patient when dealing with volatile markets in intraday trading. Applying this knowledge to an actual trade enables a trader to be more experienced and more certain of his or her decisions. Try to find and trade this pattern now on your eToro demo account, and good luck!

Despite bear markets being a natural period of a market cycle, it may be hard to anticipate such … END_OF_DOCUMENT_TOKEN_TO_BE_REPLACED

In the forex and stock market industry, prices will always fluctuate in a consolidation or … END_OF_DOCUMENT_TOKEN_TO_BE_REPLACED