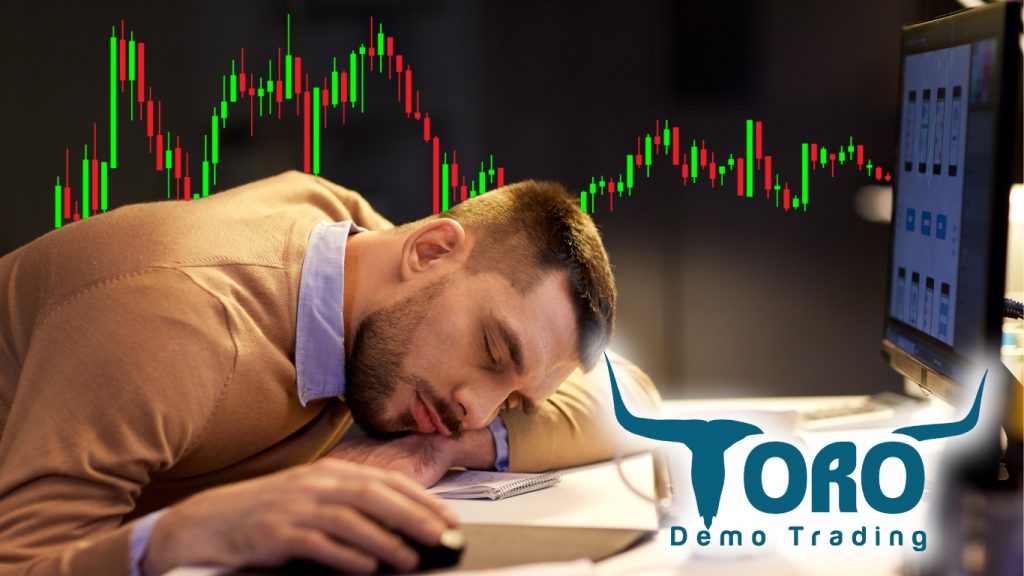 A trading range is considered to be long-term if it covers a considerable range or period such as a month, a few months to years. It involves a series of price movement which when broken down is made up of consolidations and strong trends. With such combinations of price movements and trends, traders are able to detect breakout signals through candlestick patterns. This is the reason why long-term trading is most effective when using candlestick patterns.

In addition, these patterns are considered ideal for long-term trading purposes due to their common occurrence on general charts. Many traders use it simply because the patterns occur historically or occurred on previous price movements. While some of these patterns can form within a few days to weeks’ trading range, they can also occur within a few months to years, until the pattern is complete.

The double top or double bottom pattern is a popular long-term trading pattern that is common in charts with strong trends. These patterns are reversal patterns that signal a change in the trend and are usually characterized by the letter ‘M’ for a double top pattern, and the letter ‘W’ for a double bottom pattern. In this regard, it is important to note that the peaks, as well as the troughs of the ‘M’ and ‘W’, do not need to reach or touch a common level or point. The common level or point can be either horizontal or a bit slanted.

To implement entry and exit points with the double top or bottom pattern, simply establish a trendline that connects the peaks for the ‘M’ and troughs for the ‘W’. This trendline will serve as the breakout level of the price. In other words, the ideal entry point would be when the price breaks through the established trend line. Also, a neckline should be established by drawing a line connecting significant price points that are at level with the middle point of the pattern.

Below are examples of the double top and double bottom pattern with trendlines and necklines for ideal entry points during trading. Here is an example of the double top pattern for the asset NSDQ100 on eToro. The formation of the pattern occurred within a month of the trading range (from April 7 to May 7). The upper trendline (green line) serves as the common level or point for price peaks. The neckline (red line) is the common trendline that connects the middle point with the significant lows. At the same time, the neckline serves as the breakout level for the chart. Ideal entry for short trades would be when the price breaks through the neckline. This next illustration is for the double bottom pattern for the stock ZM which formed within a range or period of 4 months (October to February). Just like the double top pattern, the double bottom pattern formed at the end of a strong trend – for this case, it’s a downtrend. As soon as the pattern formed, the pattern reversed toward an upward trend. The ideal entry point for long trades in this example would be when the price broke through the neckline (green line).

As a final note when trading the double top and bottom patterns, always wait for the pattern to form completely before making any trading decisions. As an additional safety margin, it would be best to wait for one candle after the pattern, to serve as confirmation of the trend direction.

The image below shows the general form of a Pig’s hoof pattern. It is made up of two peaks that touch a common trendline and a neckline that touches the middle trough which is also the breakout level. It is paired with the RSI indicator (blue lines) which serves as a confirmation of the trend is likely to go down or up. For this case, the trend is going down (as shown by the red arrow), thus the trend is about to reverse from uptrend to downtrend. 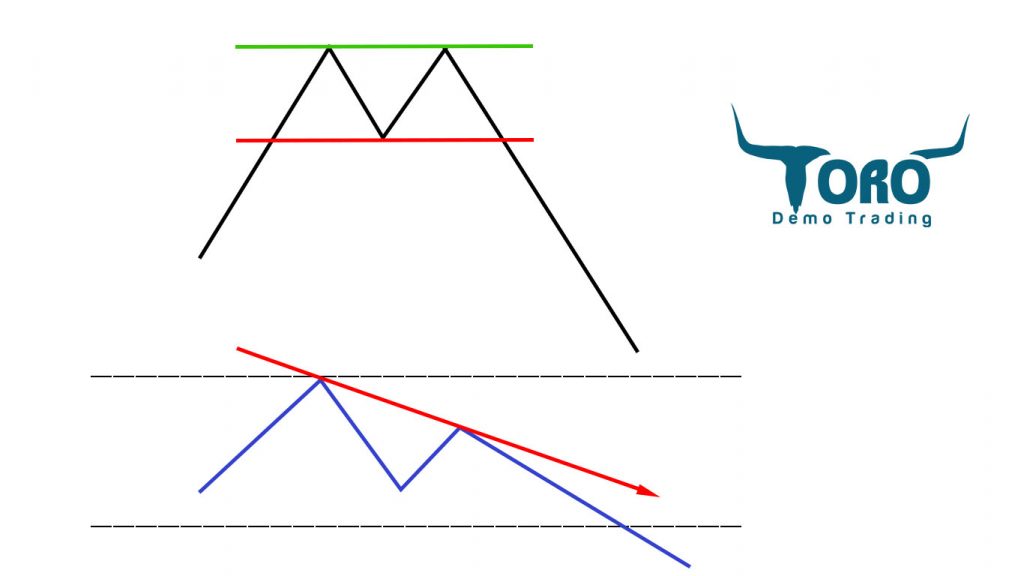 Below is the same example provided for the double bottom pattern earlier however it is added with an RSI indicator to complete the requirements of a Pig’s Hoof Pattern. The formation occurred within a range or period of 4 months (October to February). Another reversal pattern that is traded by both the expert and novice trader is the Head and Shoulders Pattern. It is made up of three peaks with the center as the head, and both peaks at the sides as the shoulders. The peak of the head should be higher than both the peaks of the shoulders. Just like the previous patterns, the Head and Shoulders pattern also requires a neckline to identify the breakout point. 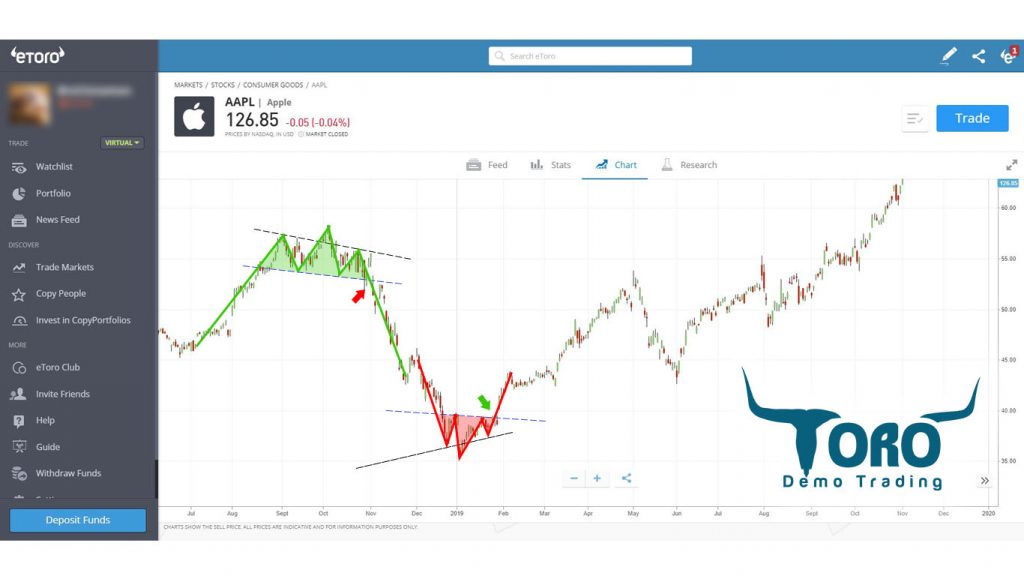 For both cases in the image, both the heads were always more significant than the shoulders. The black dashed lines indicate the peaks of the shoulders while the blue line serves as the neckline that dictates the breakout level. To draw the neckline for the head and shoulders pattern, simply draw a line connecting the base (or legs) of the head, and extend the line towards the ends of the shoulder bases.

Ideal entry and exit points would be when the price breaks through the neckline. Also, the trendlines do not necessarily need to be parallel with each other, or horizontal – as shown from the example.

Last but certainly not the least on our list is the Cup and Handle Pattern which can both be a continuation pattern and a reversal pattern depending on its location. While this pattern is recognized more as a long-term pattern, there are also certain instances where it is applicable for short-term trades or smaller time frames of trading. While this pattern occurs at the end of a downtrend, it can also occur during consolidation periods. It is characterized by a price fluctuation that resembles a cup and a momentary price drop that forms the handle. According to historical price movements and experienced traders, breakout happens as soon as the price breaks through the trend line after the handle has been formed.

As a basic condition for the cup and handle pattern, the handle should always be smaller than the cup, and the cup should form a ‘U’ shape. Also, the peaks should touch or reach a common trendline. For this example of the cup and handle for AAPL, the formation of the pattern happened during a momentary downtrend within a range of seven months (from November to June). As soon as the pattern is completed, the trend continued toward an uptrend.

In this illustration, it is noticeable that the significant points happened at the trend line or neckline which is established by connecting the peaks of the cup and handle. An ideal breakout point in this regard would be when the price breaks through the neckline. 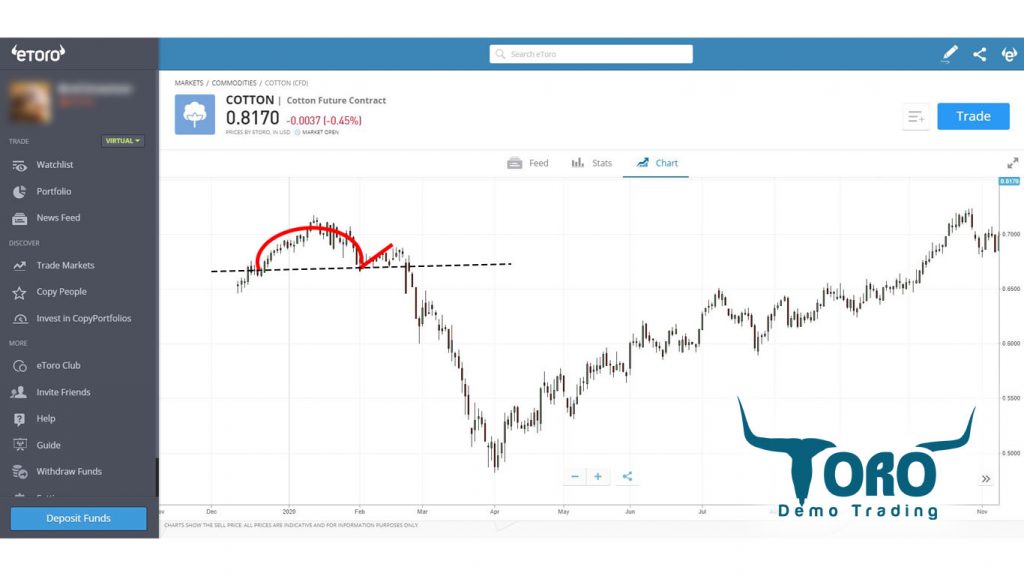 This next illustration is an example of the reverse cup and handles pattern for COTTON – trading within a range of 3 months (from December to March). For this case, the pattern formed at the top of an uptrend market. Just like the cup and handle pattern, a trend line or neckline is also required to determine ideal entry and exit points on the pattern. In this illustration, the ideal entry point for long trades would be when the price breaks through the trend line.

One important note to remember when dealing with the cup and handle as well as the reverse cup handle pattern is to make sure it completes the form and the price breaks through the trend line. Making a decision to enter a trade as soon as the handle is formed can cause losses and mistakes since the price can move toward the direction of the handle. It is always best to wait until price breaks through the neckline as a basic practice for breakouts.

With all these discussed, a long-term trading phase is not for everybody. It is important to know that before you venture into this kind of trading approach, you need to understand its details, requirements, the amount of work involved, and most especially – the amount of patience involved. Long-term trading patterns take longer to develop compared to other patterns and require attention to detail. Making decisions before the pattern is completed results in hefty losses, thus it is important to identify ideal entry and exit points as soon as a pattern is being formed and patiently wait.

A great thing about long-term trades compared to intraday trading is that there is much lesser stress involved. Since the approach is mainly about following a particular pattern, most of the work that needs to be done will only involve observing the pattern. As easy as its sounds, however, many traders give up or break before the pattern is even completed. They make hasty decisions which can lead to trading mistakes that may not only incur losses but can also ruin the trading approach or strategy upon habitual practice.

To become efficient in long-term trading, a good knowledge of these patterns mentioned in this article is essential. A good way to apply the valuable knowledge imparted in this article is to test out the strategy on actual trades. An eToro virtual account lets you trade with the actual market without having to spend anything. With the account, you’ll be able to trade with these patterns and improve trading.

Despite bear markets being a natural period of a market cycle, it may be hard to anticipate such … END_OF_DOCUMENT_TOKEN_TO_BE_REPLACED

In the forex and stock market industry, prices will always fluctuate in a consolidation or … END_OF_DOCUMENT_TOKEN_TO_BE_REPLACED