Probably the most prominent and most popular pattern found in any chart is the triangle pattern. Without using many tools or indicators, one can make easy assumptions regarding the direction of a trend by just using the triangle pattern. Be warned however that without the proper understanding of such a pattern can lead to costly wrong decisions and even misconceptions which can ruin a trader’s perspective of the market. In this article, we will share with you all you need to know about the triangle pattern, the different kinds of triangle patterns, and how to implement it on an actual trade on eToro.

What is a triangle pattern? 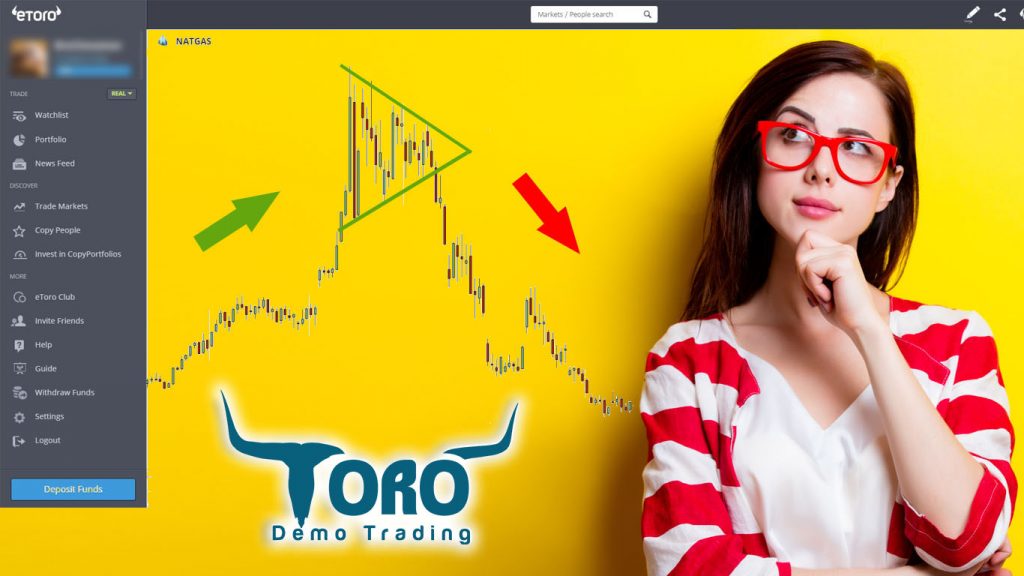 As mentioned earlier, a triangle pattern can form on any trend – on an uptrend or downtrend or even during consolidation on volatile markets. It can signify either a continuation of a trend or a reversal depending on the particular triangle formation.

Other types and classifications of triangles such as pennant, segment, and others are mentioned in our other articles however for this particular topic, we’ll discuss the three general types of triangle pattern – and these are the ascending, descending, and symmetrical triangle.

Ascending triangles as the name suggests is a triangle that points upward. Immediately this means that the trend is likely to go bullish or uptrend.

This is a bullish triangle pattern that usually forms in an uptrend. The lows are connected by a diagonal trendline. However, the highs are connected by a horizontal line (resistance, touching two or more price highs. Below is an illustration of an ascending triangle for the stock TSLA (Tesla). When this pattern forms, it’s very likely that the uptrend will continue.

To draw an ascending triangle pattern on a chart, simply connect the higher highs with a horizontal line and the lower lows with a diagonal line. A breakout happens just as soon as the upper trend line is breached or broken. 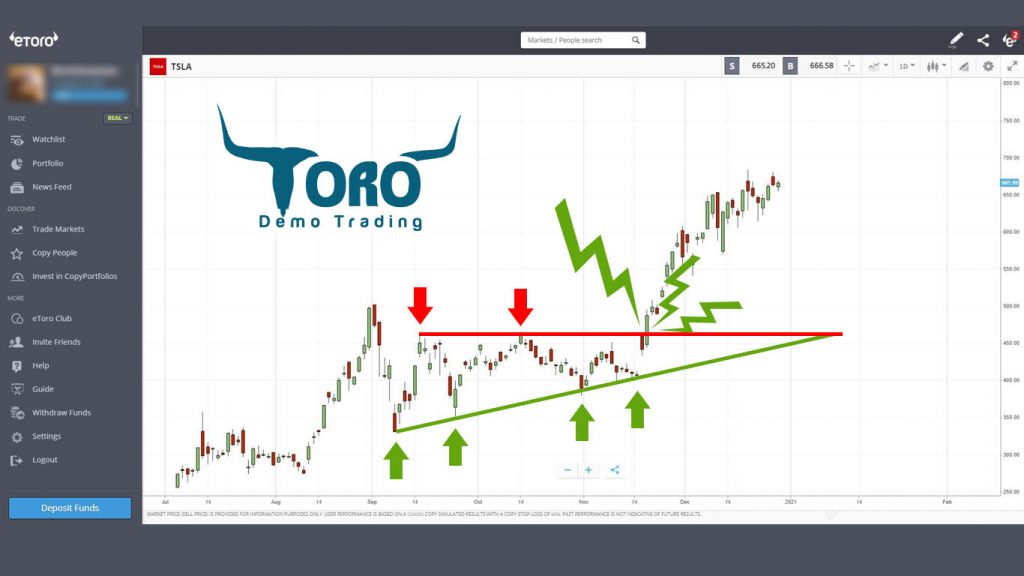 The image below shows an actual example of a descending triangle pattern for the stock SLE (Energy Select Sector). As soon as the triangle has been formed and the lower trend line has been broken, a very steep price drop has occurred.

According to many triangle pattern users, the range at which the triangle has been formed will dictate just how much the price will change. While this still needs to be verified, we can see in the example below that it almost matches the range of the triangle formation to the height of the price drop. 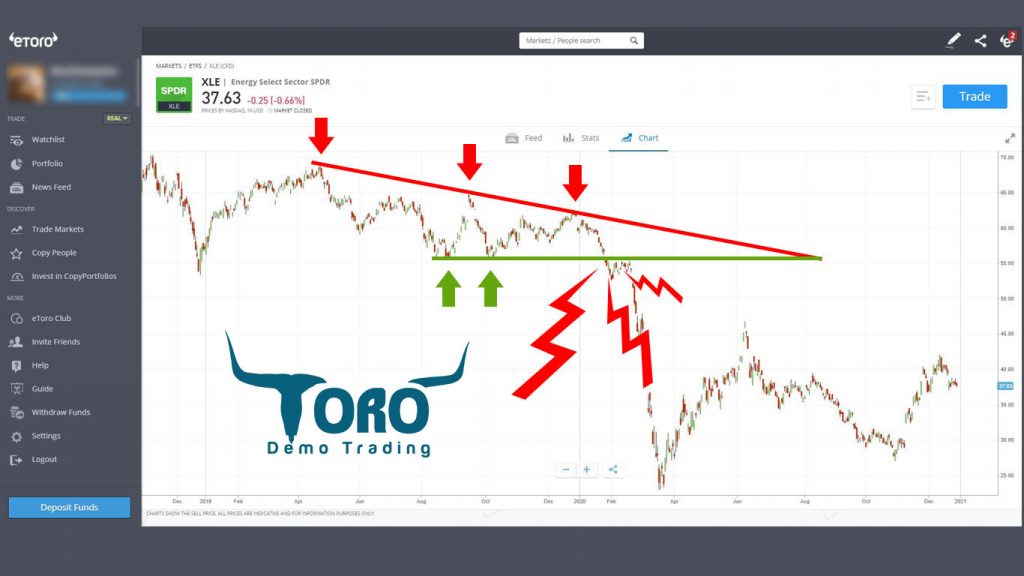 The symmetrical triangle pattern takes its name from its symmetric sides. This means both upper and lower trend lines have almost the same angle from their vertex or where the two lines meet. A breakout happens depending on which trend line is breached or broken. 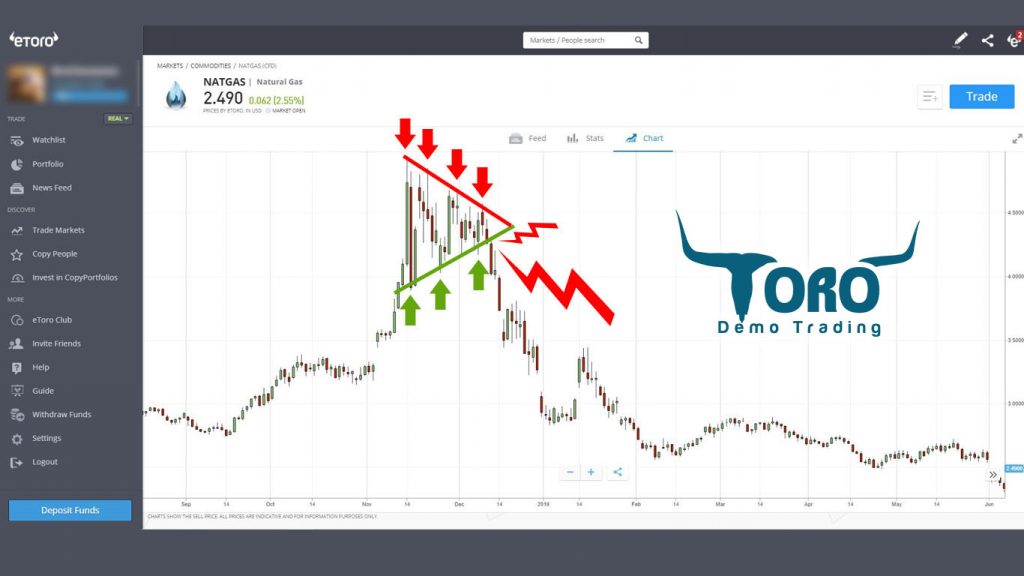 How to implement the triangle pattern on an actual trade

Now that you know what a triangle pattern is along with its technical layout, how would you effectively implement it on actual trading?

First of all, you need to bear in mind the particular trend of the market you’re focusing on. If it is an uptrend, then there is a great chance that you’ll be finding an ascending triangle – otherwise, it’s a descending triangle pattern if it’s a downtrend. Likewise, for volatile markets, you should expect to see a symmetrical triangle from the “tug-of-war” of the prices.

With regards to entry and exit points, a strong price movement with considerable volume would be a great indicator of a breakout. The breakout should be composed of a thick-bodied candle for it to be considered as a “true breakout” – as was shown in the examples.

Prior to the breakout, we can also notice a momentary decrease in volume which means traders are preparing for something big – like a breakout.

Many traders use the triangle pattern for short intervals however it is also been known to be effective with long-term range. While the pattern is already very much reliable on its own just as long as the proper trend lines are drawn, adding indicators would further improve the accuracy and assessment of the pattern.

A good indicator to incorporate with triangle patterns is the MACD. MACD stands for Moving Average Convergence/Divergence and it is designed to provide an estimate of the changes in momentum, strength, as well as the length of life of a trend. It is made up of at least two moving averages in which indicates trend reversal when the two moving averages intersect.

By incorporating MACD indicators with triangle patterns, a trader will be able to confirm whether a breakout is really a “real breakout”. The MACD indicator will also let the trader know if it’s time for the price to move based on the performance of the moving averages. 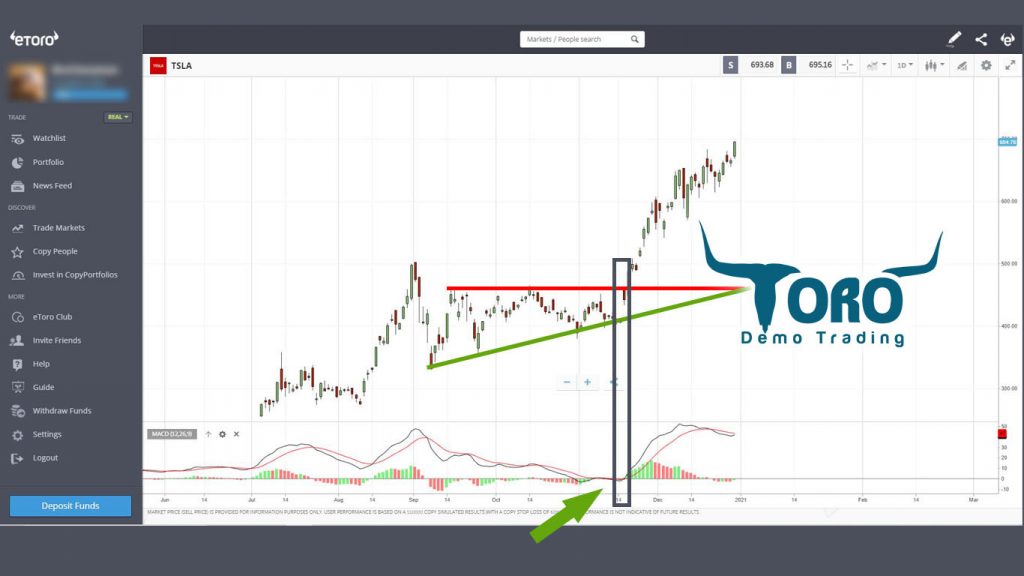 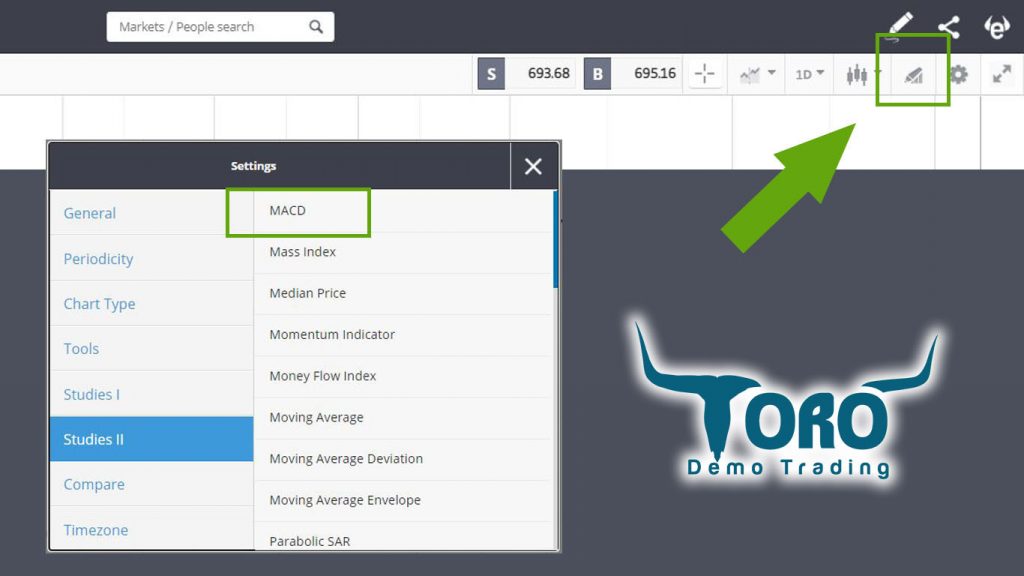 With the knowledge you’ve gained about triangle patterns, you will be more than ready to handle trades when such patterns show up. But then again, knowing is not enough – you need to put it into practice. With an eToro virtual account, you’ll be able to master the triangle pattern on actual trades without having to spend real money. Once you’re ready for the real thing, you can always go to your Real Portfolio.

Despite bear markets being a natural period of a market cycle, it may be hard to anticipate such … END_OF_DOCUMENT_TOKEN_TO_BE_REPLACED

In the forex and stock market industry, prices will always fluctuate in a consolidation or … END_OF_DOCUMENT_TOKEN_TO_BE_REPLACED