Among the most traded and most sought-after candlestick patterns in trading is the Bullish Engulfing Pattern. While it is easy to find in any chart and seems quite upfront, there are a few ways how to trade it successfully and avoid false alarms or traps associated with it. In this article, we’ll share with you how to effectively trade the Bullish Engulfing Pattern and how to avoid possible traps and false interpretations associated with it.

What Is A Bullish Engulfing Pattern? 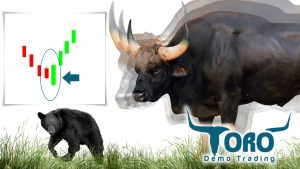 First of all, a Bullish Engulfing Pattern is a bullish type of candlestick pattern that is composed of two candles – the first candle being bearish, and a bullish second candle. The pattern forms at the end of a bearish trend or downward trend. While the pattern may also form on a sideway trend as well as upward trend, the price movement may not be very significant and this can lead to false assumptions and traps. Compared to the upward and sideways trend, the bullish engulfing pattern is recognized by most traders to continue towards a bullish trend if it forms in a downward trend.

As its name suggests, the second candle should be bullish and should totally “engulf” or overwhelm the proportions of the first (bearish) candle. 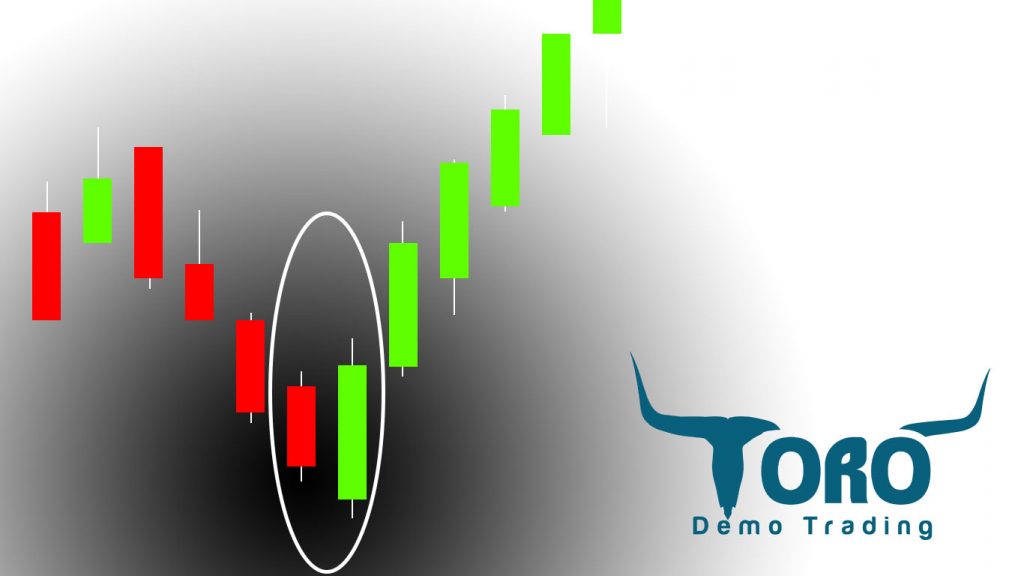 The bullish engulfing pattern forms on any trading range and can have multiple formations. As mentioned earlier, while it can show up on any trend, we’ll provide more consideration on the formation from a bearish trend since it provides a more convenient and consistent result.

The image below shows multiple formations of the bullish engulfing pattern on two upward trends and a sideways trend. as shown on the image, as the pattern formed at the end of an upward trend, the expected result was bearish – or the assumed price increase became a price drop. The same happened with the pattern formation at a sideways trend in the image. The price may have risen for a few bars however went back down and continued with a sideways movement. These are common misinterpretations of the bullish engulfing pattern, and it is essential to avoid these to lower the risks of losses.

How To Trade The Bullish Engulfing Pattern On eToro

Before we get right into the actual method or strategy of trading the bullish engulfing pattern on eToro, it is important to understand where to find it. Also, we’ll be using a few actual trades from eToro for a better understanding of the methods used.

As mentioned earlier, the ideal place to look for the pattern is on a downtrend. The range of a downtrend should cover no less than 7 bars or candles. Also, the validity of the pattern is further enhanced if the formation occurs along a trend line, support line, resistance line, or even at a channel. These lines serve as a bounce point or point where the price may start to rise.

In this first example with AMZN, the pattern has multiple occurrences. There are more than two bullish engulfing patterns on this chart however we’ll just be focusing on those that are located below the downtrend, and those that form at a trend line – in this case, at a line of support.

The first pattern occurs at the end of a downtrend and after a range of 10 bars. As an ideal entry, a long trade can be made at the closing price of the second candle. An ideal exit point for this case would be identified by drawing a line of resistance using previous price action. In this case, the exit point would be around the resistance line. Notice how the price hesitates to break the resistance line, which means the price is about to drop – this is where it is safe to make exits since a pullback is about to occur.

The second occurrence of the pattern is still at the end of the downtrend. Also, by using a line of support, the validity of the pattern is further enhanced. The ideal entry point would be the same as the previous case – at the close of the second candle. Also, the ideal exit point would be somewhere close to the resistance line. This case however shows the occurrence of a breakout. This means the price moved beyond the expected bounce or pullback point. If this occurs, it would be recommended to hold positions until a considerable bearish pattern occurs. For this case, the ideal exit point would be at the occurrence of the three black crows which is a sure sign of reversal (as shown by the red arrow in the image).

Another example is for the stock NFLX which this time makes use of a channel to identify significant points in the chart. The same basic condition applies for this example where the bullish engulfing pattern occurs at the end of a downtrend. The validity of the pattern is further confirmed as the price touches the base of the channel (as shown by the blue arrow).

The ideal exit point, in this case, would be identified by drawing a line of resistance using historical price movement or historical resistance. The safe exit point in this regard should be at the upper channel however a breakout occurred which presented a further price increase.

The bullish engulfing pattern presents an opportunity to go long on a particular trade. While it is easy to find in any chart at any given range, it should always follow certain criteria to make it valid. These criteria include the formation at the end of a downtrend, a second candle that overwhelms the first candle, a bearish first candle, and a bullish second candle, and the pattern should occur after at least 7 bars or candles. When used with indicators such as channels, line of support and resistance, the validity of the pattern is further improved or enhanced.

This pattern indeed presents a chance for price increase however there will always be a point where the price stops rising. It is important to identify exit points after the occurrence of this pattern. Ideal exit points can be identified by simply using indicators as well as historical price movement within a chart. By knowing your exit point before you enter a trade, you’ll be able to reduce the risks of losing a trade.

With consistent practice, any trader would be able to build skills and knowledge to win trades. A good way to practice with actual trades on eToro using virtual money is through the eToro virtual account. This allows you to trade in real-time using virtual funds.

Despite bear markets being a natural period of a market cycle, it may be hard to anticipate such … END_OF_DOCUMENT_TOKEN_TO_BE_REPLACED

In the forex and stock market industry, prices will always fluctuate in a consolidation or … END_OF_DOCUMENT_TOKEN_TO_BE_REPLACED