One of the most uncommon or unpopular patterns used in trading is the Diamond Pattern. One reason behind why people refrain from using this pattern in a chart is due to the fact that it thrives on volatile markets and it is used as a sign of reversal. Most traders are usually just interested in bullish or bearish markets because these markets have higher profitability potentials. However, what many traders do not know is that reversal patterns such as the diamond pattern can offer pretty much substantial profits much more than bullish or bearish markets can – all one needs to do is to read it right. 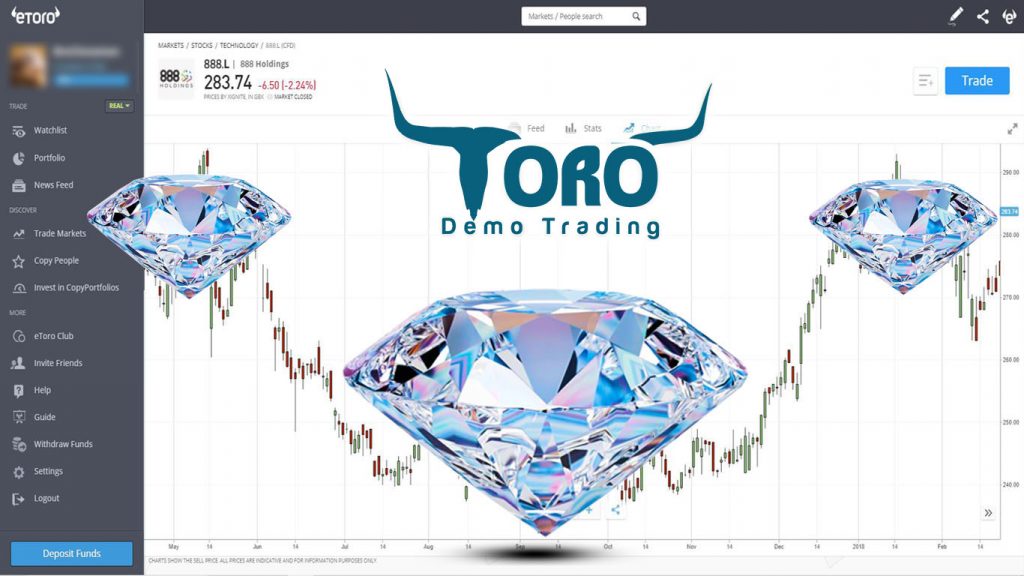 So what is a diamond pattern and how can a trader implement it on eToro?

What is a Diamond Pattern?

As mentioned earlier, a diamond pattern is a trend reversal pattern, which means, it signals a price rise right after a price fall and vice versa. It is made up of a series of trend lines which are created by connecting the higher highs and lower lows at the end of a trend. Each trend line is drawn by connecting no less than two highs or 2 lows. It should have four lines to complete the diamond structure – where the name was taken.

Whenever dealing with bullish markets, it becomes more difficult to make decisions as you reach the end of the trend. Decisions are especially difficult when a short sideways movement of the price starts to develop during the bullish trend. This is for the reason that while a short sideways can be followed up by trend continuation, it can also be followed by a reversal. When it comes to reversals, a trader should always be quick to assign exit or entry points to avoid catastrophic losses. For the diamond top pattern, it would give a signal to exit positions or sell.

As an example of a diamond top pattern, we’ll be using the stock CORN from eToro. 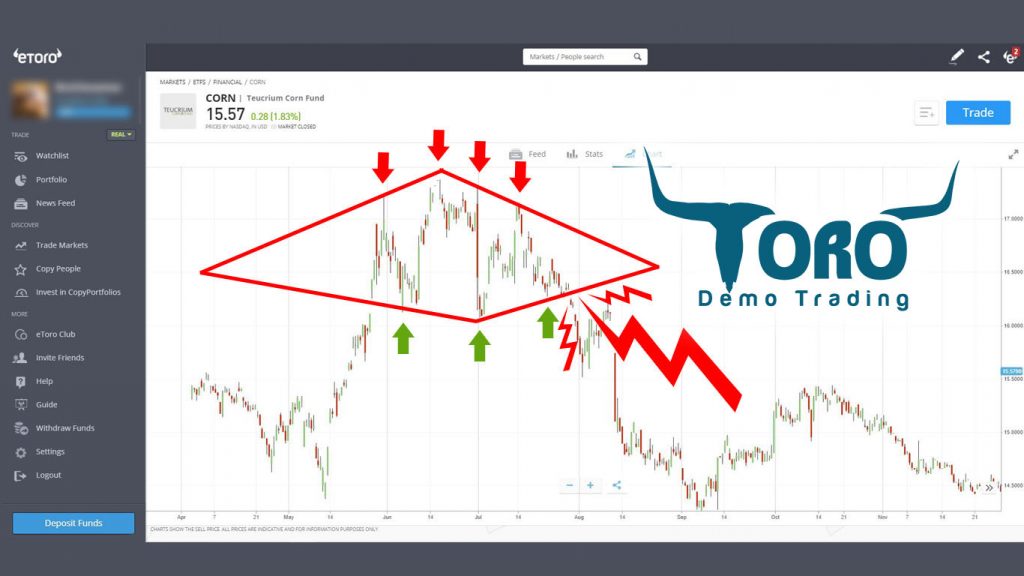 We can see from this example that it started with a bullish market with steep price movements showing a volatile market. The diamond formation is drawn by connecting the higher highs and lower lows as mentioned earlier. One thing that we need to remember when drawing diamond patterns is that the trend lines or sides don’t have to be symmetrical or of the same angle or length. A rough cut diamond is still considered a diamond for this case.

From this illustration, the price reversed or bounced as soon as it touched the sides of the diamond. And breakout happened as soon as the right side of the diamond is breached. After it breached the trend line, it tried to go back up but failed and eventually continued to a steep downtrend.

In this case, exiting positions from the breakout point is the best decision in evading a considerable loss from a steep downtrend. While there is a top formation, there is also a bottom formation for the Diamond pattern. The diamond bottom pattern develops at the end of a bearish trend and it signals a trend reversal for a bullish market. In application, this kind of pattern is where traders should be building up their positions in order to ride the price increase of a market.

For the example of the diamond bottom pattern, we’ll be looking at the chart of 888 Holdings for the pattern.

As mentioned earlier, the formation of the diamond pattern can occur at any range. For this particular example, we can see that it occurred in a huge range which covered almost 5 months to complete the formation. Just like the diamond top pattern, trend lines are formed by connecting the higher highs and lower lows at the end of the trend.

The trend started at a bearish market and reversed to a bullish market. One thing to note when it comes to breakouts is that it is usually confirmed by a strong series of candles penetrating the trend line – just as what is shown from both examples.

Chart patterns are among the most proven ways on how to assess a given market. It allows a trader to make safe and profitable decisions while riding the market. While the diamond pattern can be hard to find in a chart, it is something that can be used independently and it delivers promising results depending on how you assess the market.

To master this pattern along with all the other chart patterns discussed on our page, you can create a virtual account on eToro. the virtual account lets you trade on real-time markets using virtual money. With this, you get to experience the real trading and at the same time practice with your patterns.

Despite bear markets being a natural period of a market cycle, it may be hard to anticipate such … END_OF_DOCUMENT_TOKEN_TO_BE_REPLACED

In the forex and stock market industry, prices will always fluctuate in a consolidation or … END_OF_DOCUMENT_TOKEN_TO_BE_REPLACED